Surrounded by olive groves and vineyards of Chianti, Siena is one of the most beautiful cities of Tuscany. Built on three hills, the city is crossed by wide avenues and narrow alleys that lead to the heart of the city, Piazza del Campo and all other cultural landmarks such as the Duomo and the Hospital of Santa Maria della Scala. Famous for the Palio, the historic horse race, which is held every year on July 2 and August 16, Siena is also home to one of the oldest universities in Europe. In addition to the daily life that animates every day in the streets and squares of the city, Siena offers many cultural events, concerts, cinema, theater and a wide range of sporting activities.

On top of a hill, Pienza is the "ideal city" of the urban renaissance. It was Pope Pius II, Enea Silvio Piccolomini, to conceive towards 1459 the idea of transforming the medieval village of Corsignano, designing it according to the theories formulated by Leon Battista Alberti. The work was entrusted to Bernardo Rossellino who collaborated Alberti.

Corso Rossellino is the main thoroughfare of the village overlooked by many shops, offering the famous local delicacies (especially the famous cheese).

Piazza Pio II, trapezoidal shape is the monumental center of Pienza. On the square facing the Cathedral, the Piccolomini Palace with the beautiful well built and designed by Rossellino and the Town Hall. 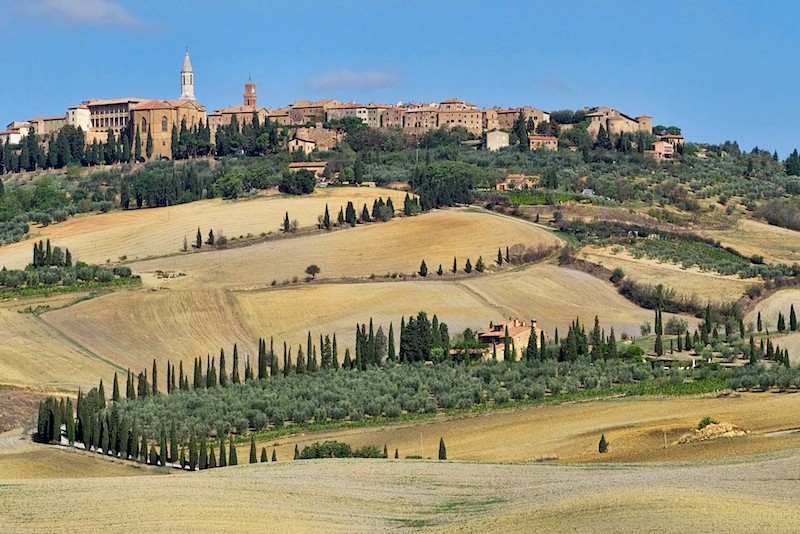 Monticchiello is a quaint little village that makes up a district of the town of Pienza in Siena province. The tiny population of Monticchiello amounts to just over two hundred inhabitants yet there is still plenty for tourists to do and see here.
The town originated in Roman times but expanded more during the Middle Ages. It fought frequently with the nearby town of Montepulciano over territory until Siena city eventually intervened and made peace between them. Since then Monticchiello di Pienza flourished in the local industries of handicrafts and artisan. 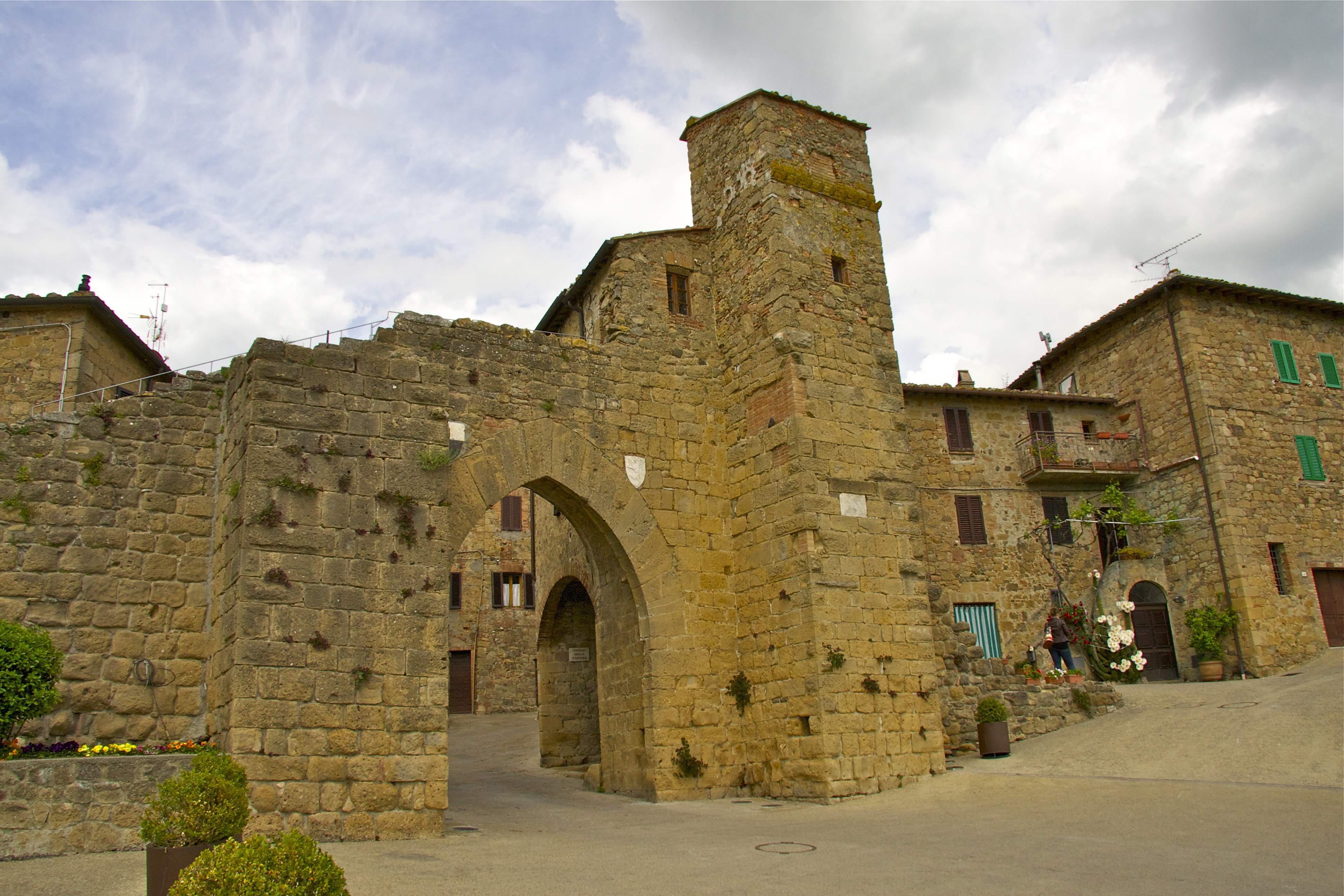 Montalcino is a medieval village perched on the hills of Val d'Orcia known for Brunello, one of the most appreciated and famous wines in the worldThe medieval town, with a population of just over 5,000 inhabitants, is located along the road leading from Sienafino to Mount Amiata, at the end of the Val d'Orcia.

Origins of previous year One Thousand, Montalcino becomes a small thriving reality thanks to the growing population increase due to the arrival of Roselle exiles, attacked by the Saracens.Independent town of considerable importance due to its strategic position along the Via Francigena, Montalcino enters the orbit of Siena at the time of the battle of Montaperti in 1260 and became a stronghold.

But it is since the twentieth century that the name of this village regains importance as such for the good fortune of being in the middle of one of the most important grape-growing areas: in fact, tourism and especially the production of wine are always the springs economy Montalcino.The Brunello wine is one of the most popular red wines and appreciated in Italy and abroad; many fans come to take a winery tour to Montalcino in Tuscany, where you can taste and buy different types diBrunello in many wineries and wine shops that fill the country. Before Brunello may be put on the market requires a five-year aging, two of which in oak barrels.

Since 1957, the last Sunday of October, Montalcino celebrates the Festival of the Thrush, an event accompanied by a shooting competition with the bow that turns the hearts of the entire population. 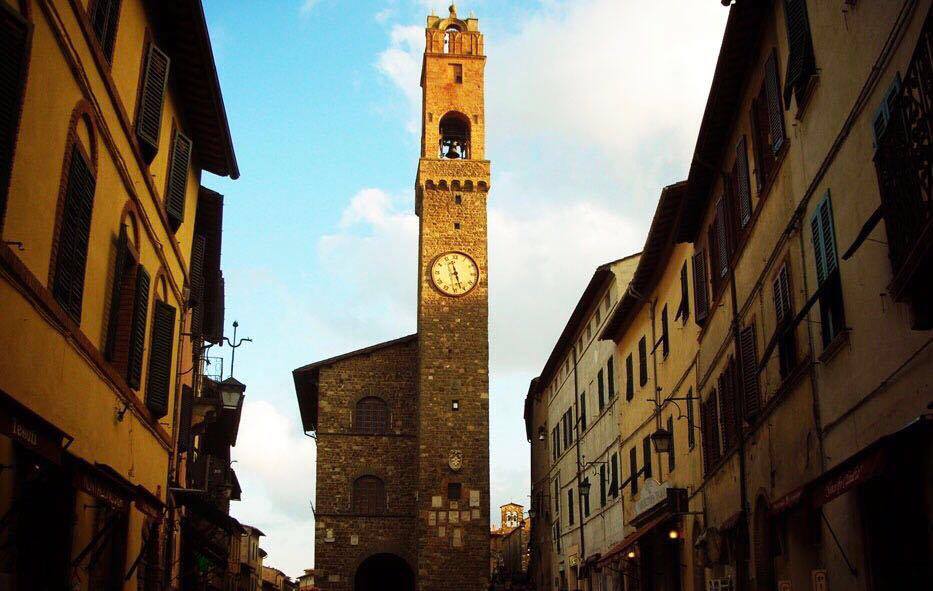 Bagno Vignoni is one of the most charming and best preserved medieval towns of Tuscany. Located in Val D'Orcia, set in a picture postcard setting and world-renowned vineyards, and part of the town of San Quirico d'Orcia in the province of Siena, it is known worldwide for its spa, whose activity dates back to 'Roman times. 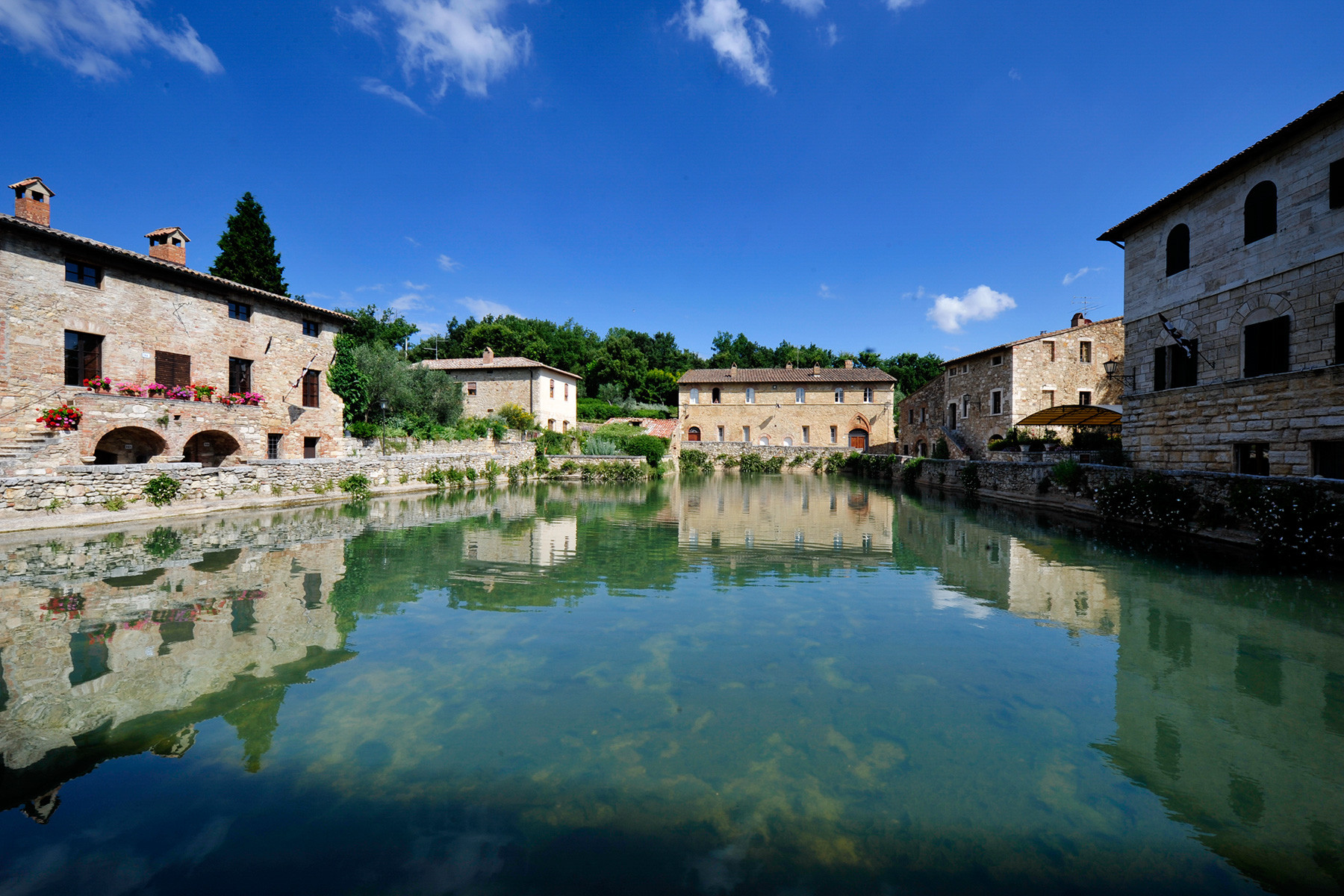 The castle, whose original building dates from the year one thousand, was one of the possessions of the powerful abbey of Sant'Antimo.

In 1100 he came under the ownership of Tignosi, the Salimbeni and, after the fall of the Republic of Siena, the Amerighi.

Today remains of the ancient village remains only the truncated tower of the keep from high shoe and the small church of San Biagio. 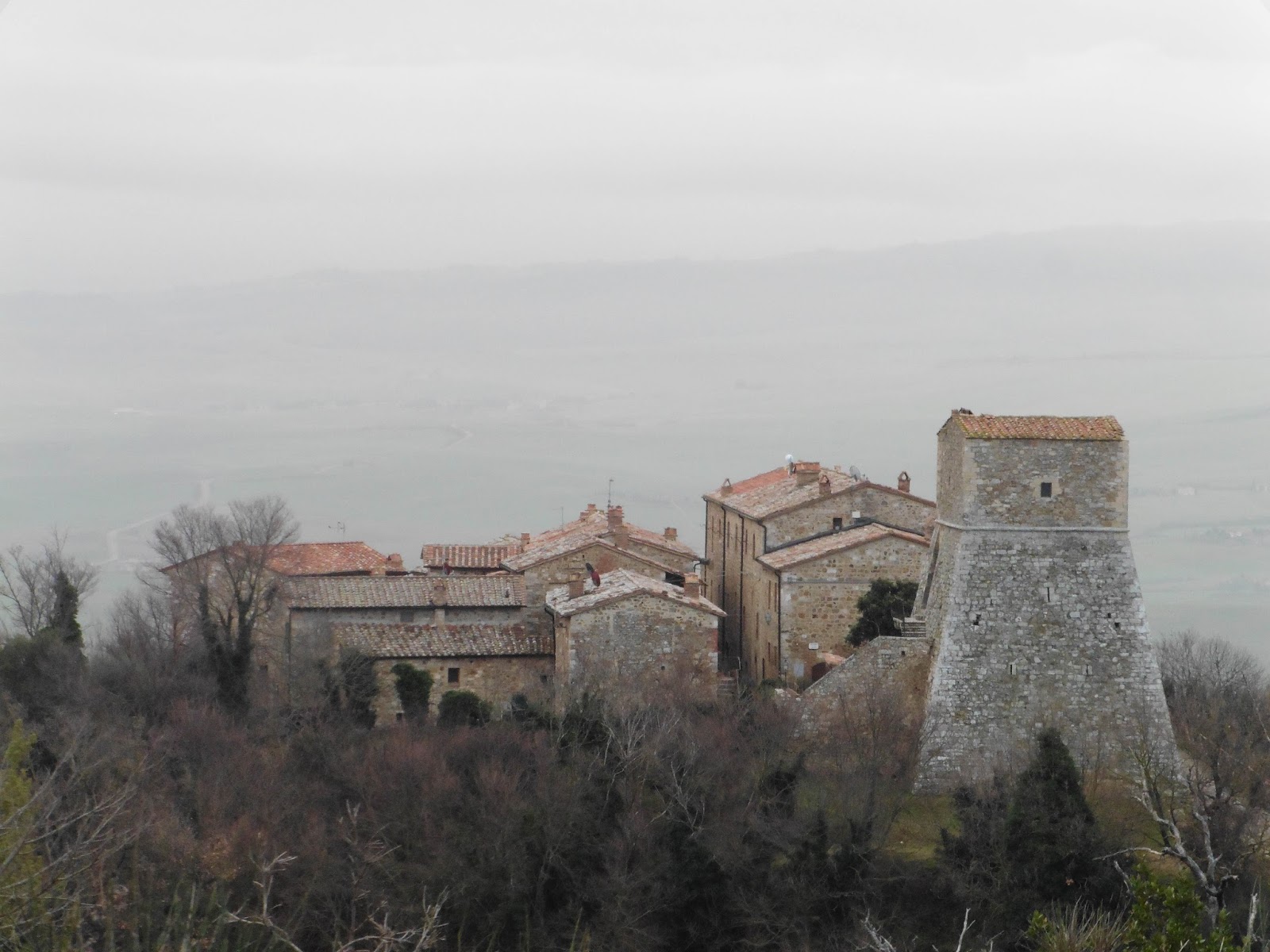 The Abbey of Sant'Antimo stands in solitary Starcia Valley, which lies a few kilometers south of Montalcino (SI). The abbey church is one of the most important Romanesque monuments in Tuscany. The building is inspired by French Benedictine models and Lombard and stands majestic in a countryside of rare beauty. Although there is no evidence, according to legend, to found the abbey was the emperor Charlemagne in 781, returning from Rome. Confidently it knows that Louis the Pious, son of Charlemagne in a document makes deed of gift to the abbey of goods and privileges to which the place of worship certainly existed in the Carolingian era. 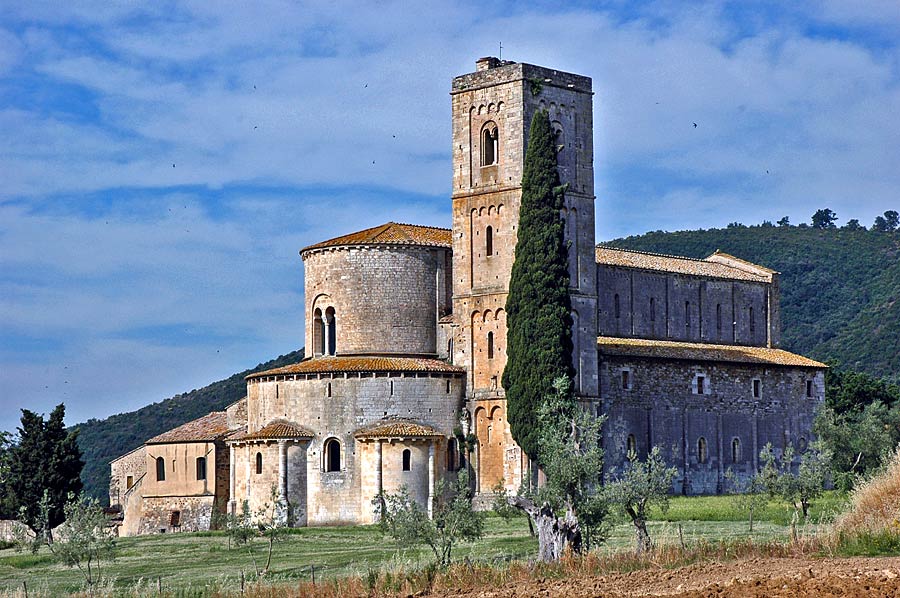 The abbey was founded in 1313 by John Tolomei, a law professor belonging to an important Sienese family, who became Monaco, he took the name of Bernardo after he joined the order of the Benedictines. At 40 years, the Ptolemies, with Patrizio Patrizi and Ambrogio Piccolomini, retired in this inhospitable place owned by the family. The foundation was approved in 1319 by the Bishop Guido Tarlati. The construction of the monastery began in the following year. 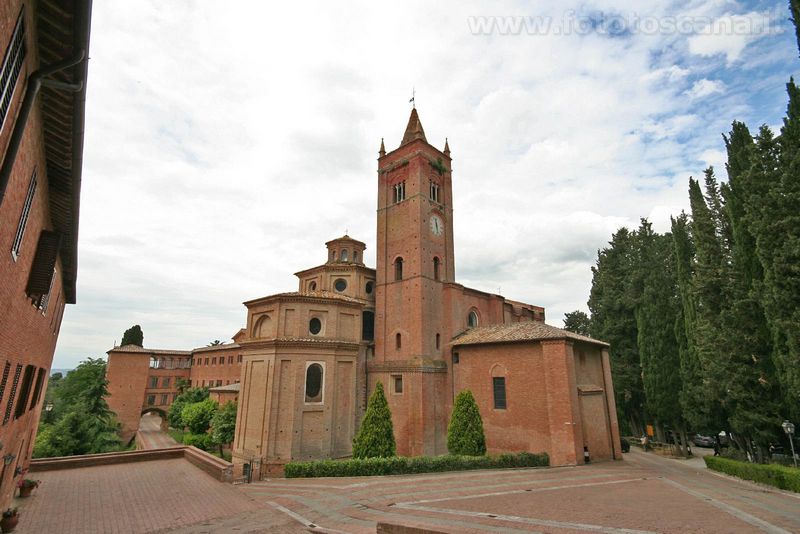 Bagni San Filippo is a small thermal village immersed in the green forests of Mount Amiata. The calcium carbonate waters that sprung from various springs were already known to the Romans as evidenced by some archaeological finds.

The thermal baths were attended by illustrious figures belonging to the Medici family, such as Lorenzo il Magnifico, who went there in 1485, and Grand Duke Ferdinand II, that in 1635 attempted to free himself from a persistent "headache". The Baths were restored in 1566 by Cosimo I de 'Medici's.

The name of the place recalls the vicissitudes of San Filippo Benizi, prior to the Florentine Order of the Servi di Maria, who in 1296 took refuge in a small village not far from the springs to escape the election to the pontificate of the conclave of Viterbo.

The slope of Monte Amiata, where Bagni San Filippo is located, is characterized by the limestone deposits formed by the water that flows from the rocks. Over the millennia these outcrops have created abundant concretions; The most spectacular ones overlook the Rondinaia torrent, also called "Fosso BIanco" for the color of its waters. The most impressive concrete appears to us as a solidified waterfall and is known as the "Balena Bianca".

At the end of the eighteenth century Giorgio Santi carried out a first chemical analysis of the waters and in the nineteenth century Antonio Targioni Tozzetti carefully studied them, while Giuseppe Giuli evaluated her therapeutic properties. The waters of Bagni San Filippo are classified as hyperthermal sulfur sulphate-bicarbonate. Their temperature at source is 52 ° C. They are particularly suitable for balneotherapy, fangobalneotherapy, inhalation and for the treatment of osteo-neuro-articular diseases, ear, nose and throat diseases, respiratory illness and dermatological diseases.

Today, the San Filippo Baths, with their modern facilities, are a destination for relaxing holidays and offer, thanks to the healing properties of their waters, a valuable remedy against various affections. But even nature lovers here can enjoy this resource of nature freely. 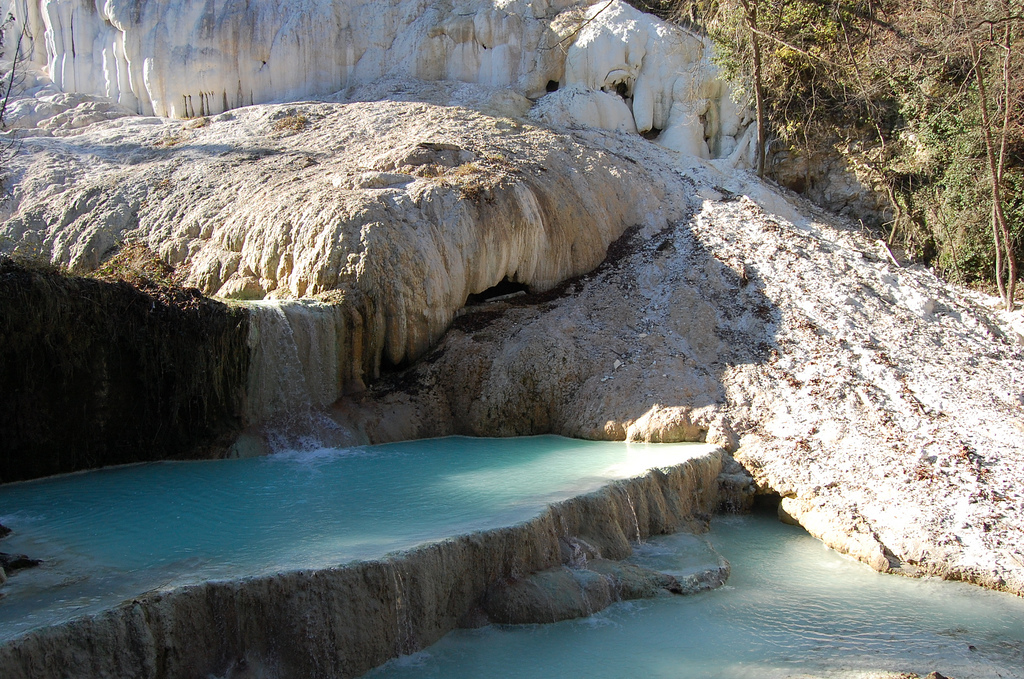 Etruscan roots, excellent vineyards and an atmosphere that has captivated directors all over the world. Montepulciano, a village perched on a hill between the Val di Chiana and Val d'Orcia, is the ideal destination for a relaxing weekend. Immersed in an agricultural landscape of valleys and gentle hills , Montepulciano is internationally known for its Noble Wine. The best way to know the area is to book a tour of the countryside vineyards and enjoy tastings. Still today the wine rests in precious oak barrels.

Montepulciano is a medieval village, enclosed by three walled enclosures and dotted with Renaissance buildings. Do not miss the temple of the Madonna di San Biagio, a late-Renaissance church in pearled white travertine, the Medici Fortress of Sangallo, the 14th century gate of Gracciano and the Church of Santa Maria dei Servi, with Gothic-Tuscan facade, A beautiful Madonna with Child painted by Duccio di Boninsegna.

A different way to visit the country is to look for places captured by the cinemas over the years. Here were directed the Arcidiavolo of Ettore Scola (1966) and Nostalghia by Andrej Tarkovskij (1983). In 1996, Ralph Fiennes and Juliette Binoche arrived to play The Patient English, and three years later Rupert Everett, Kevin Kline and Michelle Pfeiffer, together in Dream of a Midnight Summer Night. A couple of years ago, Montepulciano was also the set for the Italian New Moon scenes, the second chapter of the Twilight saga, just formally set in Volterra. 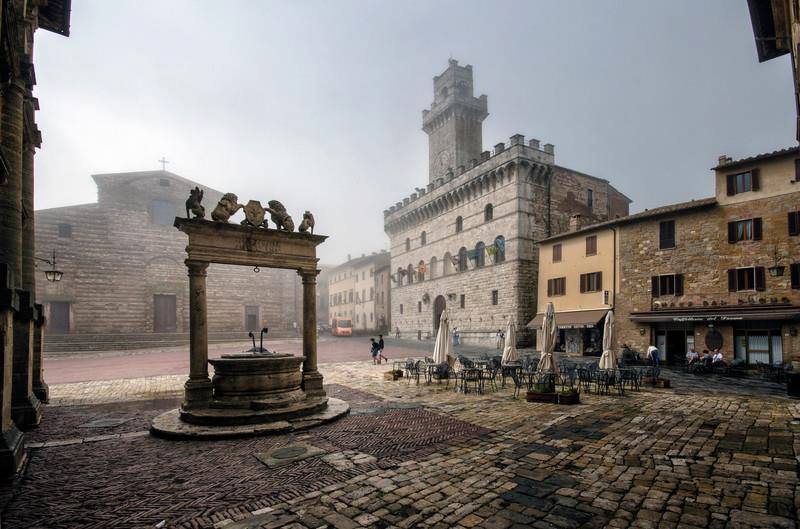 Mount Amiata is located south of Siena, and is entirely crossed by the Via Cassia, which in ancient times was one of the major arteries of the magnificent road system built by the Roman Empire, and from Rome. The Amiata is a mountain rich in rivers, wild animals and dark forests of beech and chestnut, land of farmers and miners from the outspoken and frank face, bearers of strange stories and legends or foreclosed to the men of the plain. Especially the Monte Amiata is - or rather was, thousands of years ago - a huge volcano whose eruptions have for centuries flooded the surrounding low hills of ash, lapilli and lava that once condensed and layered to the ground, have become tuff, marking and emblem of an entire civilization, the Etruscan.

Now that the fear of an eruption has disappeared, the Amiata (1750mt s.l.m.) is also one of the most famous ski resorts of Tuscany. But once disbanded in the spring, the snow is slowly absorbed by the ground water and returned hot, very hot (from 37 to 45 ° C), to the many springs that flow all around the Mount, a sign that inside some volcanic activity , albeit residual, he continues to survive.

These thermal waters, rich in sulfur and other healing elements, were attended by the aristocracy of the Roman Empire; we find also mentioned in the travel journals of merchants and pilgrims in the Middle Ages crossed the Via Cassia and immersed themselves in these sources to give relief to the legs and feet tortured by a long march. Springs flow in the vicinity of almost every hamlet, from Bagni di San Filippo, Bagno Vignoni, from Santa Fiora in Saturnia. Each of these towns has developed a collection of hot springs system that gave birth to modern health centers with pools, saunas, salt-massage and so on; Yet, for the more adventurous, there are still many sources, through the woods or in the countryside, where everything has remained unchanged for thousands of years. 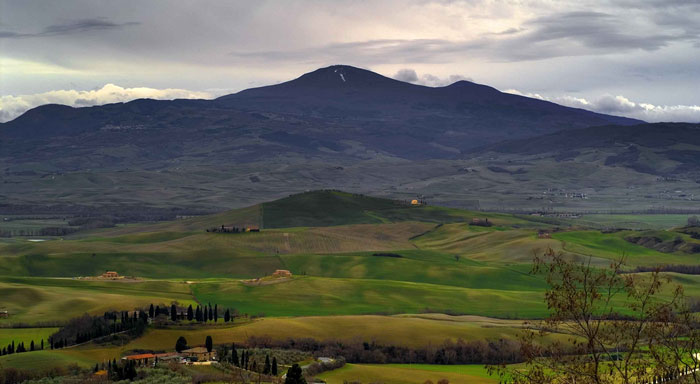